THANK YOU FOR SUBSCRIBING

Devashish Paul, Founder and CEO The energy sector is currently undergoing two crucial transformations—digitalization and liberalization. This has lead to the generation of a lot of data from smart meters, grid equipment, edge sensors, GIS systems, and others. The data holds a huge potential in helping utilities reduce expenditure , lower carbon emissions, and manage energy generation and supply. Though the advantages of gaining insights into this data are myriad, the utilities are limited by lack of resources and technology tools. This is where BluWave-ai, an Ottawa-based technology innovator in distributed renewable energy space, comes into the picture. The company’s cloud-based energy optimization platform ingests the data from grid IoT devices (sensors, meters, etc.) to discover the patterns in bandwidth utilization and power generation to help utilities plan the operations better. The platform predicts changing operating conditions, makes a functional call on it, and sends the dispatch control signal on how to configure certain elements in the utilities to reduce the cost of energy and carbon footprint.

BluWave-ai’s energy optimization platform is a SaaS (software as a service) offering, utilizing the hardware and IT systems already in place and the data already being generated at the utility. Unlike conventional rules-based programming, BluWave-ai’s artificial intelligence (AI) models execute decisions faster and more efficiently. The platform picks up the meaningful trends in the energy production and supply environment throughout the day. For instance, the solar panels are producing energy optimally as it is bright out there, but after some time, the output falls as the clouds cover the sun. The platform detects the drop in energy production. And based on the current and historic trend, it predicts how bad the drop is going to be in next 30 seconds, over the next minute, or next hour or next day. So, the platform is not only reacting to the data but also predicting which way the trend will go to provision things inside the energy network. Besides, it uses real-time operational data to continuously improve the AI models to optimize energy costs and other operational goals.

“Utilities use our platform to make good decisions that save them 10 to 20 percent of energy costs and optimize the use of renewable energy sources,” says Devashish Paul, Founder and CEO, BluWave-ai.

Often utilities use expensive fossil fuel-based energy sources to provision the final amount of energy that is needed for consumer and industrial demand. This is because they do not know in advance the energy requirements and whether they can depend on solar or wind energy to get there, or if they can do certain things to manage their load to reduce the overall energy requirements to stay within the limits of energy produced. BluWave-ai’s optimization platform provides the utilities the continuous insights to help them change their generation, mix load and balance that off perfectly with minimal human operator intervention. “This continuously saves them money throughout any given 24 hour period for the whole year. Maybe the value of any given hour isn’t earth shattering, but when you add this small amount of savings over 8760 hours in a year, suddenly it adds up to a substantial amount,” he adds.

The biggest testimonial to BluWave-ai’s success is the city of Summerside (on Prince Edward Island, Canada). The city enjoys a significant wind and solar infrastructure, but still had to import up to 57 percent of its energy supply from neighboring NB Power because weather conditions can reduce solar generation by up to 70 percent, and no wind means no power. At the same time, not having real-time insight into user loads meant Summerside Electric had to sometimes over-provision capacity to ensure reliable supply. BluWave-ai’s predictive platform is yielding up to 50 percent improvement in energy scheduling accuracy over the utility system baseline. “BluWave-ai’s low-risk onboarding allowed us to run a set of AI-enabled tests over several months, in effect test-driving the platform in our own environment.
Working shoulder-to-shoulder with BluWave-ai put us in the lead nationwide with a machine learning solution to refine operational efficiencies and offset carbon use,” says Bob Ashley, former Chief Administrative Officer, Summerside Electric, Summerside, Prince Edward Island, Canada.

The company has developed AI models for solar and wind energy, and for price reduction, load balancing, and carbon offset. These models are similar in these different use cases in the way they ingest data, but are tuned to each customer’s operational objectives. Such design architecture makes the platform beneficial to not only grid operators, utilities, and DSOs, but also grid-tied and off-grid microgrids, and renewable energy generators. Besides, the platform has considerable application in EV fleet operations. It uses the data from utilities, energy markets, renewable generation forecasts, and operational systems to enable operators to shift the load to reduce peaks and net energy costs and implement demand-response and other services.

The goal of BluWave-ai is to drive the transition from a centralized, carbon-based energy model to the point where clean energy can be produced by almost anyone, anywhere, aided by advanced real-time computing to optimize its generation and use. BluWave-ai is building the world’s premier renewable energy AI company and has won regional, national and international awards. It won the Smart Grid category at the 24th Annual World Energy Congress held in Abu Dhabi in September 2019. In February 2020 BluWave-ai was selected as one of the Top 3 companies by Startup Energy Transition (SET) in the Digital Systems category.

“What we want to do is transform the industry using data driven techniques to reduce carbon footprint and use more wind and solar energy,” remarks Paul. He further adds, “We foresee our platform being like the energy AI platform of the future that will provide intelligence to the global smart grid. In the short term, during the post-pandemic economic recovery, it will be increasingly important for utilities to find operational cost savings with little or no capital investment. As a pure software solution, BluWave-ai is well positioned to offer that.” In a nut shell, there is an energy hardware market with transformers, solar panels, batteries, generators, wind turbines, and others, but BluWave-ai will be the intelligence platform behind the energy network.
- Aaron Pierce
September 25, 2020 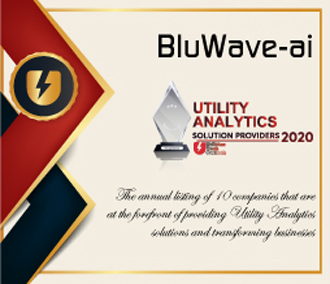 Description
BluWave-ai is focused on driving the proliferation of renewable energy and electric transportation worldwide. The company’s solutions apply artificial intelligence to optimize the cost, availability, and reliability of different energy sources, both renewable and non-renewable, in real-time. The platform predicts changing operating condition, makes a functional call on it, and sends the dispatch control signal on how to configure certain elements in the utilities to reduce the cost of energy and carbon footprint. This lets the customers—communities, corporations and utilities—improve their energy decisions for sustainability, reliability, and affordability

However, if you would like to share the information in this article, you may use the link below: